Literary memories of World War One

Focusing on works of fiction produced during the 1920s-30s, Professor Emeritus Modris Eksteins explores the role of literature as a means to confront and overcome the devastation of World War One.

The war brought in its wake a crisis of authority of gargantuan proportions: political, economic, social, and, most strikingly, artistic. In the postwar years every book was a war book whether it dealt with the war or not. The war cast its pall over everything. The old comforting connections – the pleasing harmonies, rhymes, and colours – were gone. ‘It’s nice outside,’ wrote the French ex-serviceman and journalist Emmanuel Berl, ‘let’s go to the cemetery.’[1]

For those myriad grieving families who had suffered personal loss in the war, tradition provided some comfort – whichever side you were on. The millions of deaths had not been in vain. The extensive commemorative literature – regimental histories, reverent memoirs, and volumes of diplomatic documents – elicited short notices in the press and a quiet respect, but none of it stirred much debate.

From the Island of the Sea: the West Indian Battalion in France 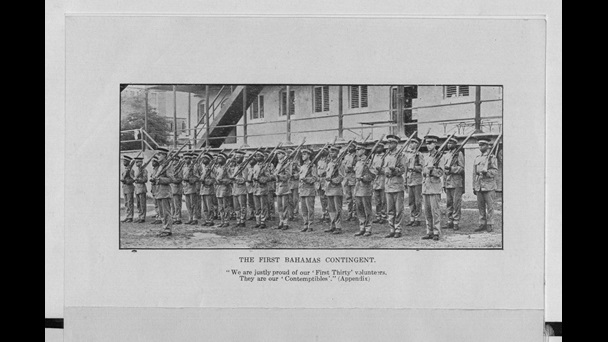 Published in 1919, this example of commemorative literature records the actions of one of the West Indian battalions active in World War One.

For some, whose emotional pain was often excruciating, such accounts were superficial flimflam. For these survivors, whether soldiers or civilians, the war had transcended previous notions of reality and thus undermined all official explanation, indeed all external truth. Only personal experience remained. The upshot, projected by the title of C E Montague’s war memoir of 1922, was Disenchantment, a profound and festering disillusionment with the world that had produced and waged the war. In this mindset, against the backdrop of the machine massacres of Flanders, Verdun, and the Somme, humour turned absurd, art increasingly provocative, and music decidedly experimental. In literature, too, old forms no longer sufficed. Even language was called into question. T S Eliot doubted its ability to capture essence; Franz Kafka termed it a lie; e e cummings, the American poet who had been an ambulance driver with the French, regarded all standard rules of writing, from grammar to punctuation to the capitalisation of his own name, as fatuous restrictions, and Ernest Hemingway said famously in A Farewell to Arms (1929) that ‘abstract words such as glory, honour, courage or hallow were obscene’: only place names now possessed dignity. All the old slogans and values had been shattered as if hit by a monstrous artillery shell.

The diary of a dead officer, the papers of A G West 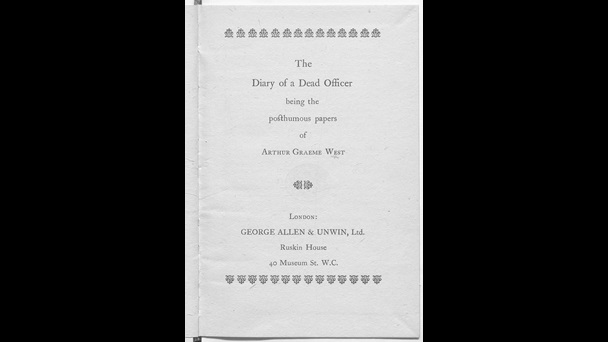 Arthur Graeme West enlisted into the British army in 1915. The Diary of a Dead Officer was published after his death in 1917: it was one of the first published realistic accounts of life in the trenches.

For a decade publishers, convinced that the public did not wish to read about the war, resisted war material. Then suddenly in 1928-29, everything changed. The public couldn’t get enough of the war. Erich Maria Remarque’s All Quiet on the Western Front, first serialised in a Berlin newspaper in December 1928, led the way. It depicted the destruction of an entire class of students, one by one, not in order to make the world a better place but simply on account of the cupidity, arrogance, and narrow-mindedness of its elders. The book became a huge international success, the first genuine modern bestseller, rushed into some 30 translations around the world and filmed by Hollywood. In Germany Remarque was joined on the bestseller lists by Arnold Zweig, Ludwig Renn, and Ernst Glaeser; in England by the memoirists Edmund Blunden, Robert Graves, and Siegfried Sassoon, as well as the dramatist R C Sherriff, whose play Journey’s End had 594 performances at the Savoy and Prince of Wales theatres in London from 1929 to 1931. London buses were plastered with the words ‘All roads lead to Journey’s End.’ The notion of the ‘lost generation’ became common coinage. ‘It is time,’ wrote the respected American critic and veteran Malcolm Cowley in 1933, the year the decorated soldier Adolf Hitler took power in Germany, ‘for us to admit … that all of us fought in vain.’[2] The German Führer of course disagreed. For Germany, he claimed, the war had been a spiritual victory. Yet he, too, wished to reshape the world on the basis of his own experience, his personal struggle – Mein Kampf, as he called it.[3]

The end of history?

For many, fiction had displaced historical writing. The study of history, a dominant intellectual impulse of the late 19th century, was too constrained by rules; fiction represented freedom. In the 1920s everyone seemed to be waiting, not for the comprehensive historical account, but for the supreme literary masterpiece that, like Homer’s Iliad or Tolstoy’s War and Peace, would invoke and explain all. For Ernst Kantorowicz, author of a widely applauded biography of the medieval emperor Frederick II, the genres blended. At a conference of German historians in 1930 he stirred up a hornets’ nest when he suggested that ‘historical scholarship and historical fiction are, despite their mutual animosity, rightly interchangeable concepts.’[4]

All is not quiet

Many of these issues, particularly the ongoing crisis of authority and the concomitant disintegration of category and definition, still resonate. Novelists and filmmakers keep being drawn to the First World War as a major source of this process of deconstruction and liberation. Aleksandr Solzhenitsyn, Timothy Findley, Jane Urquhart, Sebastian Faulks, and Pat Barker, among others, have used the war as a setting to probe contemporary concerns about art, gender, social relations, psychology, and remembrance.