On one level the First World War was a contest between nationalisms. Its propaganda featured national flags, national martyrdom, heroic representations of the peoples and their leaders, and dehumanizing caricatures of the enemy. Nationalism was not just manufactured by official propaganda, but carried widespread popular resonance. In many countries national identity and solidarity were strengthened by the events of 1914; but by 1917 such loyalties had become divisive, some feeling them more than ever while others grew disenchanted.

The war grew out of a struggle between South Slav nationalism and a multinational empire (Austria-Hungary) that rested on dynastic tradition. But Britain and France had colonial empires, and Tsarist Russia was almost as multinational as Austria-Hungary. Hence both sides had to weigh the attractions of subverting their enemies against the risk of blowback into their own possessions. In fact the Germans were quickest to support nationalist movements, primarily against Britain. In the spring and summer of 1914 the British government had faced the danger of a civil war between Loyalists and Republicans in Ireland, and could not count on the British army’s reliability for coercing the Ulster Protestants. The Germans attempted to exploit such tensions by shipping arms to the Republicans before the Easter 1916 rising in Dublin. They also encouraged Flemings against Walloons in Belgium, and Poles against Russians. But their schemes had little success until in 1917, when partly due to German actions the Bolsheviks seized power in Russia, and promised self-determination for such peoples as the Balts, Ukrainians, and Finns.

Synopsis of our obligations to our allies and others 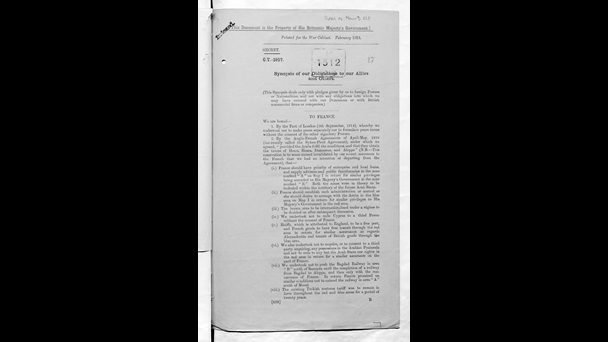 For the Allies, Austria-Hungary and Ottoman Turkey were the key targets. Britain and France supported the claims by Serbia, Italy, and Romania to the South Slav, Italian, and Romanian speakers under Habsburg rule. But they hesitated over breaking up Austria-Hungary completely, because they hoped its government would break with Germany and conclude a separate peace. These hopes strengthened when Emperor Karl I succeeded to Franz Joseph, and put out peace feelers while easing internal repression. But once the Germans learned of his secret diplomacy they forced him to abandon it, and now Britain, France, and America had no cause for restraint. In 1918 they backed the claims to self-determination by the Poles, Czechs, Slovaks, and South Slavs, while the parties representing these groups had become alienated from Karl’s regime, and demanded not just autonomy but independence. When Karl announced the ‘federalization’ of the Austrian half of his empire, he triggered nationalist takeovers in Krakow, Prague, and Zagreb. Karl went into exile, Austria-Hungary broke up, and the new states of Poland, Czechoslovakia, and Yugoslavia replaced it. In the 1990s two of these would also disintegrate.

To my faithful Austrian people! Proclamation by Emperor Karl on 16 October 1918 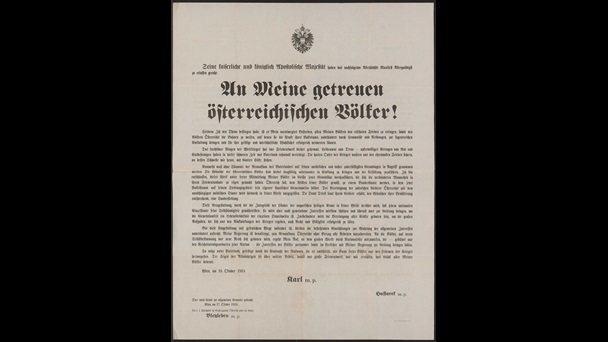 Proclamation by Emperor Karl on 16 October 1918 declaring how he will meet the needs of the Austrian people.

The proclamation of the abdication of Emperor Karl I of Austria 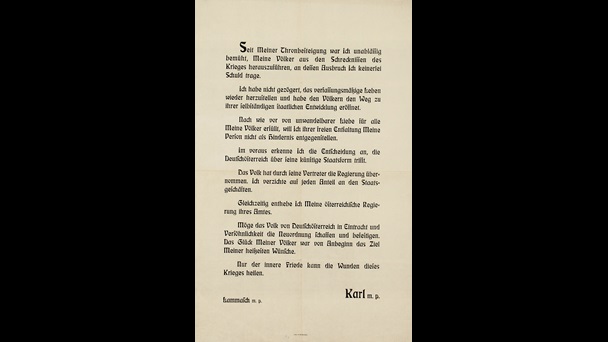 Turkey and the Middle East

In the Ottoman Empire a nationalist party, the Young Turks, dominated the government when war broke out. About half the population was Turkish; the minorities included Kurds, Armenians, Arabs, and the Jewish community in Palestine. The Armenians inhabited both sides of the Turco-Russian border, and the Turks suspected them of disloyalty. In 1915 the authorities began a campaign of deportation, starvation, and massacre that led to the deaths of about half the Empire’s two million Armenians. Meanwhile, in what are now Syria and the Lebanon, perhaps half a million more people died of famine (partly due to Allied blockade).Conditions were ripe for the Allies to encourage separatism, and in the secret ‘McMahon-Hussein correspondence’ the British promised an Arab state to Sharif Hussein, the ruler of the Hejaz. In June 1916 Hussein launched the Arab Revolt. In addition, however, in the 1916 Sykes-Picot Agreement, the British assigned to French domination lands that Hussein had supposed would become independent, and in the Balfour Declaration of 1917 they promised a ‘national home for the Jewish people’ in Palestine. The website documents testify to Hussein’s growing disillusionment. 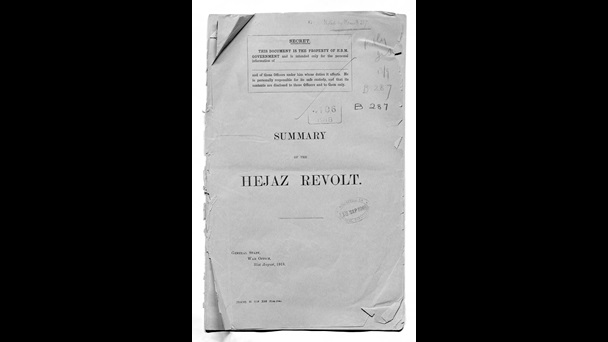 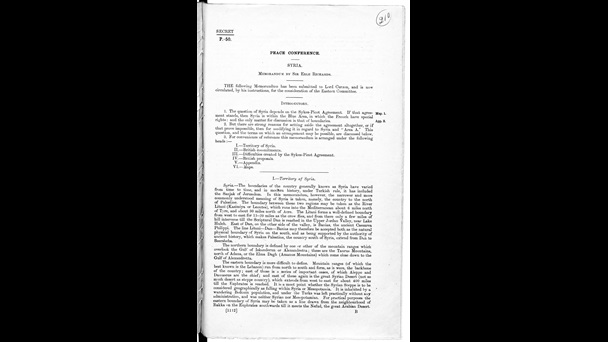 At the end of the war Europe and the Middle East were redrawn on nationalist lines. France regained Alsace-Lorraine, lost to Germany in 1871. Italy and Romania occupied the territories the Allies had promised them. Austria-Hungary and the Ottoman Empire disintegrated, and although the Soviet Communist Party reconquered most of tsarist Russia’s former borders, the Baltic States, Poland, and Finland would be independent for the next generation. In the British Isles, an attempt to impose conscription in 1918 hardened support in the southern Irish counties for the Sinn Féin separatist movement. In 1919-21 a guerrilla campaign by the Irish Republican Army won self-government for the south of Ireland at the price of deepening divisions between Protestants and Catholics in the north. And across Europe as a whole, although political and ethnic frontiers now coincided more closely than before 1914, many communal tensions became fiercer than ever, and ultra-nationalist, even fascist movements thrived on the superheated atmosphere generated by the war. 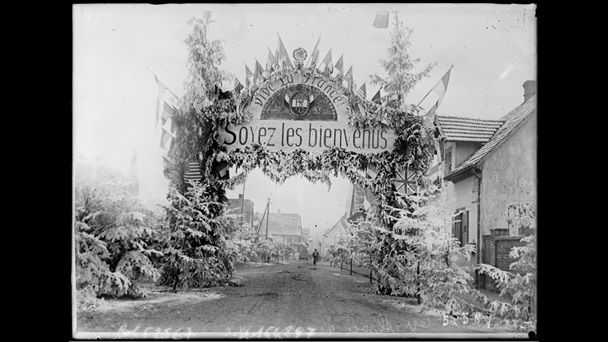 Photograph taken in December 1918 displaying the three Allies’ flags which helped Alsace to reconquer the province. 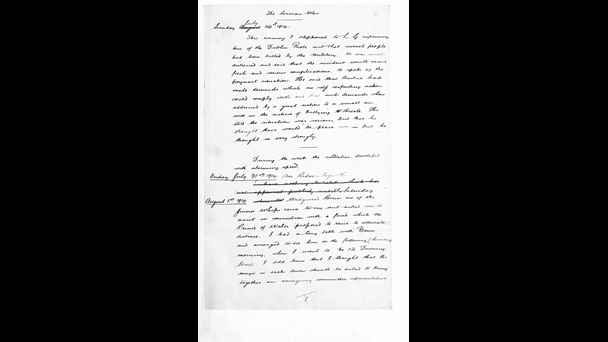 Personal diaries of George Allardice Riddell, a newspaper proprietor who monitored political opinions of whether Britain should enter the war.

Held by© The copyright status of Add MS 62958-62964, diaries by George (Baron) Riddell, is unknown. Please contact copyright@bl.uk with any information you have regarding this item.