Professor Gary Sheffield discusses conformity and rebellion of World War One troops within the frame of military discipline and punishment.
One of the factors that enabled the soldiers of the First World War to endure terrible conditions and high casualties was discipline. Military discipline makes the difference between a mob and an army. It is a form of behaviour that is the consequence of training and indoctrination, designed to ensure compliance to orders among individuals and groups, to create and maintain cohesion in military units. The fact that the undermining of officers’ authority in Russia after the March revolution (1917) was an issue in the mass desertions that followed offers evidence that discipline is the glue that holds groups together and makes them act as one in response to orders.

Brutal training to mould an army

Armies in the First World War drew upon a pool of recruits, some of which were already accustomed to industrial discipline in factories and other workplaces. Germany and Britain, for example, were highly industrialised and urbanised societies in 1914. All working-class soldiers would have been used to being at the bottom of society, with all that entailed. Even so, all armies subjected new recruits to basic training which ranged from the unpleasant to the brutal, the aim being to break down the individuality of the new soldiers and to mould them into a group that would carry out orders unquestioningly. 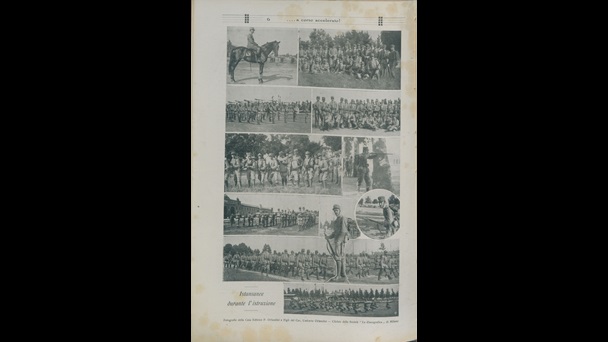 Photographs of training undertaken by cadet officers at the military academy in Modena, Italy, 18 July 1915.

Discipline was operated with a carrot-and-stick approach. Conforming brought benefits: regular food, leave and other privileges. Rebelling incurred punishments, which differed from army to army. Most were fairly minor: stoppage of privileges, giving offenders unpleasant or dangerous duties. British Empire forces used Field Punishment: the most severe version including tying a malefactor to a fixed object for a period of time. Although much resented, this was more humane than the traditional punishment of flogging (which was still used on Indian troops). As an emergency measure, the Russian army reintroduced flogging in 1915. Imprisonment was a possibility although as it this offered a way out of the trenches, it tended to be used sparingly. 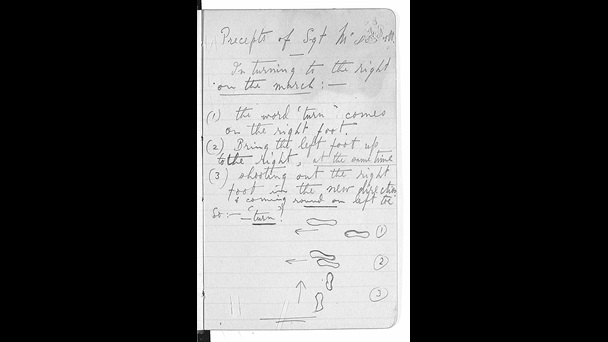 Detail from the papers of Roland Gerard Garvin when he was undertaking military training at Chelsea, London, in December 1914. He lists his main duties: obedience; cleanliness; sobriety and honesty.

Mutiny, desertion and the ultimate punishment

Mutiny was the gravest military crime, for it struck at the very heart of military discipline, and desertion was not far behind for similar reasons. Nearly all armies executed malefactors. Sometimes the purpose was to act as a warning or deterrent to others, with the justice of sentences passed on individuals of less importance than the disciplinary needs of the army. There were certainly cases, perhaps numerous ones, of psychiatric casualties (soldiers who have sustained mental wounds) being shot. Civilian justice and military discipline served two different purposes.

Germany used the ultimate penalty sparingly: only 48 of 150 death sentences were carried out. The numbers shot by the French army are unknown, as they included some summary executions, but the shooting of 600 (out of 2,000 condemned) are documented. However, in the aftermath of the mutinies of 1917, while 554 men were sentenced to death, only 49 were executed. The British executed 321 for military offences, plus an unknown number of Indian soldiers. The Australian government refused to allow death sentences to be carried out on their men, otherwise subject to British military law. Punishments were particularly savage in the Italian army. They included ‘decimation’, choosing soldiers by lot from a unit that had failed in some way, and executing them. A favoured policy of General Luigi Cardona, it was discontinued by his successor as de facto Commander-in-Chief, General Armando Diaz, seeking to restore the morale of the army after the disaster at Caporetto in 1917. Some 750 Italian soldiers were shot.

Discipline was an important factor in holding armies together, but it was not the only one. Depending on the army and the individual, belief in the cause, loyalty to unit and/or comrades, leadership and other issues were also significant: in 1918, Austrian soldiers were deterred from deserting because they decided that the army’s meagre rations were preferable to facing famine at home. Nevertheless, without the bonds of discipline, armies could not have stayed in the field for as long as they did.

G.D. Sheffield, Leadership in the Trenches: Officer-Man Relations, Morale and Discipline in the British Army in the Era of the First World War (Basingstoke: Macmillan, 2000)