Professor Stephen Badsey considers the huge volume of official documentation produced during and after World World One for both public circulation and as secret state records.

The First World War is remembered as the first great war of submarines, aircraft, tanks and machine-guns. But it was also the first great war of typewriters, filing cabinets, and mass printing. In all industrialised countries, government bureaucracies functioned through systems of committees evaluating and writing documents. In some armies even soldiers going into battle were expected to record the events each day, in unit official war diaries. The result was a massive volume of officially-produced documents, providing a mountain of evidence for historians.

Today, attitudes towards such official documents range from a belief that they carry the stamp of authenticity and approval, to the opposite belief that any government document had to be at least partly intended to deceive. In fact, like all historical evidence, these documents only start to reveal the truth when they are questioned and placed into context. Very often, they show us what governments believed at the time, or wished to be believed. An official report into a military disaster and scandal, such as the British defeat at Kut al Amara, was a document heavy with political implications, but there would have been little point in publishing it if it had been wildly inaccurate. In many cases, official documents also contain a lot of what is called ‘unconscious evidence’: records and numbers that can be analysed to reveal patterns, such as the statistical tables in a post-war history of a wartime military hospital. It is a historians’ truism that much history is found not in accounts, but in account-books.

Report on the defence of Kut-al-Amarah 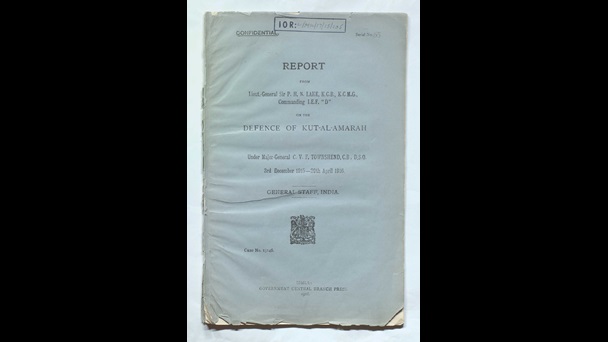 Confidential report on the defence of Kut-al-Amarah under British General Townshend from 3 December 1915 to 29 April 1916.

Official documents are so important to the history of the First World War that our understanding of the war has changed several times since 1914, as more and different official documents have been released or discovered. At the start of the war the major powers all rushed into print, with books of selected official documents on the crisis of June-August 1914, each country seeking to show that it had been innocent and that another country had been the aggressor. Later in the war, following the Bolshevik Revolution of November 1917 the new revolutionary government deliberately made public secret treaties and documents about the war that it had found in the records of the Czar’s government. Many documents remained secret after 1918, and some did not survive to the present day. Sometimes this has been due to chance or circumstances: most of the records of the German Army (the Prussian Army archive) were destroyed in a fire in 1945; most of the records of the Ministry of Information, the main British propaganda arm in 1918, are also missing. Sometimes, the loss has been due to the simple cost and impracticality of keeping so much paper stored securely. Some documents, on their publication, have come to be valued as the only record of a critical historical event. In all cases, the preservation of official documents in libraries and archives has been vital to our present-day understanding of the war.