Recruitment: conscripts and volunteers during World War One

Dr Alex Watson looks in detail at the statistics surrounding the millions of conscripted and volunteer soldiers who served the European armies of World War One.

The origins of conscription and the ‘citizen-soldier’

The First World War was fought predominantly by conscript armies fielding millions of ‘citizen-soldiers’. The origins of this type of military lay in the levée en masse (mass mobilisation) organised by the French revolutionary regime at the end of the 18th century, the first modern force built on the idea that all male citizens had a duty to bear arms in defence of their nation. However, it was France’s rival Prussia which improved and systemised the military model, developing a new form of universal short-service peacetime conscription. After spectacular victories over Austria and France in 1866 and 1871, this provided the organisational template for other continental European armies. Austria-Hungary imitated it in 1868, France in 1872 and Russia in 1874. Britain and the United States, which relied primarily on their navies for security, were alone among the major powers in remaining with small professional armies.

Short-service systems of conscription obliged healthy male citizens to undergo a relatively brief period of military training in their youth and then made them subject for much of the rest of their adult lives to call up for refresher courses or for service in an emergency. The exact terms of service varied from country to country but Germany’s system provides a good example. There, men were drafted at age 20 for two or three years of peacetime training in the active army. While all had an obligation to serve, financial limitations meant in practice that only a little over half of each male year group was conscripted. After training, men were released into civilian life but could be called back to the army until they reached the age of 45. In between, men passed through various reserve categories. Those who had most recently completed their training belonged to the first-line reserve for five years, where they could expect to be redrafted early in the event of crisis. Later, they were allocated for a decade to the second-line Landwehr. The third-line Landsturm was the oldest band of reservists, intended mainly for rear-line duties in a major war. The short-service conscript system offered two major advantages. First, it created a large pool of trained manpower that could quickly augment the standing army in an emergency. In August 1914, the German army needed just 12 days to expand from 808,280 to 3,502,700 soldiers. Second, in a long conflict, the system offered an organisational framework capable of deploying nearly the entire manpower of a state as soldiers. Conscript forces became true ‘nations in arms’ in 1914-18. 55% of male Italians and Bulgarians aged 18 to 50 were called to military service. Elsewhere the proportions were even higher: 63% of military-aged men in Serbia, 78% in Austro-Hungary and 81% of military-aged men in France and Germany served.

The picture book of the Landsturm Man 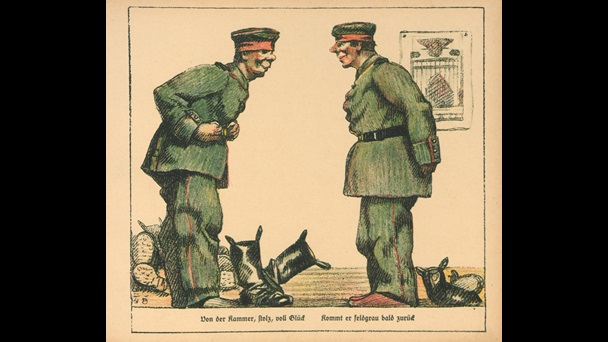 Detail of an illustration from The picture book of the Landsturm Man (1917).

While conscript armies proved indispensable, and even the British in 1916 and the Americans in 1917 began to draft men, significant numbers of volunteers also served in the First World War. Most famously, in Britain 2,675,149 men volunteered, the vast majority in the first half of hostilities. However, even countries with long traditions of conscription also had large volunteering movements. In Germany, around half a million men came forward. The great rush was at the start of the war: in the first 10 days 143,922 men enlisted in Prussian units alone. France’s voluntary enlistments were smaller but steadier, reaching 187,905 men by the end of hostilities. In multinational Austria-Hungary, men appear to have been less willing to volunteer for the Emperor’s army, although they promptly obeyed call up orders. Some nationalist movements did recruit successfully, however. The Polish Legionaries, the largest of these forces, had 21,000 volunteers by 1917. While volunteers tended to be disproportionately middle-class, their motives for joining the army may not have been so different from those of conscripts. Patriotic duty appears to have been a prime motivation for both groups, although coercion was also influential. Volunteers were not subject to the legal sanctions faced by conscripts who disobeyed drafting orders but they might be exposed to considerable social pressure to enlist. For small minorities, economic factors or lust for action and adventure were important. These recruits, whether conscripts or volunteers, were ‘citizen-soldiers’, whose attachment to their societies and stake in their states’ existence go far to explain the tremendous resilience of the armies of 1914-18.