Sensuous life in the trenches

From smell and sound to touch and perception, Dr Santanu Das draws on soldiers' records to consider the sensory experiences within the trenches of World War One.

‘Everything visible or audible or tangible to the sense – to touch, smell and perception – is ugly beyond imagination’ wrote W. Beach Thomas after spending five months on the Somme in 1916. More than twenty years later, while writing the foreword to the Collected Poems (1937) of fellow poet-soldier Isaac Rosenberg, Siegfried Sassoon observed: ‘Sensuous frontline existence is there, hateful and repellent, unforgettable and inescapable’.

'Break of Day in the Trenches' by Isaac Rosenberg 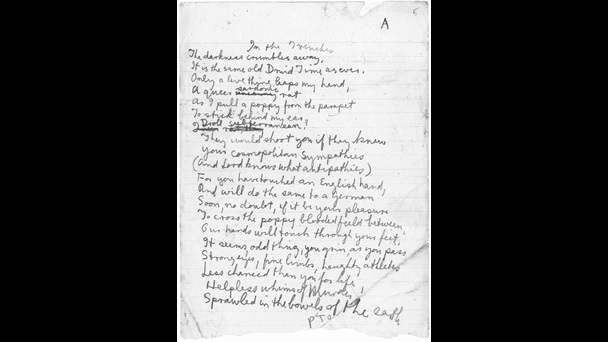 Manuscript draft of 'Break of Day in the Trenches', one of Isaac Rosenberg's best known poems.

The trench experience on the Western Front was one of the most sustained onslaughts on the human sensorium: it thrust man’s fragile body between the ooze of primordial slime on the one hand and the terrors of shellfire on the other. By November 1914, deadlocked armies on the Western Front encountered each other in a series of zigzagging trenches which soon developed into vast subterranean worlds. There were trenches at Gallipoli and the Italian front, but it is the pockmarked narrow stretch weaving for 475 miles from the North Sea to the Swiss border that has come to form the emblematic terrain of First World War memory. ‘In those miles of country’, Harold Macmillan wrote on May 13, 1916, ‘lurk (like moles and rats, it seems) thousands, even hundreds of thousands of men, planning against each other perpetually some new device of death’. Archival images bear poignant testimony to daily life within the trenches: from their construction, carried out here by the Indian Labour Corps, to a forlorn-looking soldier sitting hemmed in by sandbags, to a British soldier washing himself in a shell-crater, or a group of soldiers having their hair cut.

Trench life and the senses

Mud, shells, barbed wire, rain, rats, lice, trench-foot: these iconic images of the First World War have been etched on our consciousness through a handful of soldier-poets but there exist a wide variety of material – notebooks, diaries, journals, memoirs, sketches, interviews, trench songs, memorabilia, and thousands of photographs – which, read together, open up the sensuous world of the trenches. In the diary of J. Bennet, housed in the IWM, the phrase ‘Dull cold day’ is obsessively repeated, voicing the commonest complaint of trench-life, while Lewis gunner Jack Dillon recalled years later how ‘the mud there [at Passchendaele] wasn’t liquid, it wasn’t porridge, it was a curious kind of sucking kind of mud ... a real monster that sucked at you’. Rain and artillery fire joined forces to turn the trenches into cesspools where the men floundered and even drowned; or, killed by shell-fire, their bodies dissolved into the slime. ‘A nightmare of earth and mud’ recalled infantryman and French novelist Henri Barbusse, while German officer Erich Maria Remarque wrote in his celebrated novel All Quiet on the Western Front (1929): ‘Our hands are earth, our bodies mud and our eyes puddles of rain’. In the dark, subterranean trenches, men navigated their way not through the safe distance of their gaze, but through the immediacy of their bodies: ‘creep’, ‘burrow’, ‘crawl’ and ‘worm’ are recurring verbs in trench narratives, as the familiar visual universe was supplanted by a strange tactile geography. Touch became the ground of testimony and trauma: after three weeks on the Somme, Wilfred Owen wrote to his mother, ‘I have not seen any dead. I have done worse. In the dank air I have perceived it, and in the darkness felt’. Amidst the deafening roar of a bombardment, sound was often registered as touch: ‘I felt that if I lifted a finger I should touch a solid ceiling of sound’ wrote A. McKee as he tried to describe the bombardment at Vimy Ridge.

However every single day was not an exercise in horror. Frontline existence was actually one of boredom, interrupted by bursts of terror. An ordinary day would be spent in small, dank dugouts, where the soldier would make tea, lunch on bully beef, or ‘chat’ – which meant both delousing and gossip. At night, the trenches came alive. Under the cover of darkness, the troops would be replaced; carrying parties would replenish supplies and small parties sent out to conduct trench-raids or repair wires. However, there was no one trench experience: it varied according to the rank, the sector, the unit; life as a private was different from that as an officer. Daily experience also differed, from being sheltered in underground bunkers (with the occasional piano!) – the Germans had deeper and more comfortable bunkers – or playing with the dog, to standing knee-deep in mud. Moreover, if one visited Ypres in wartime, one would have seen not just European troops, but Senegalais tirailleurs, Indian sepoys, North African spahis, the Maori Pioneer Battalion or Chinese and South African labourers. An Indian sepoy wrote: ‘Our hearts are breaking, for a year has passed while we have stood to arms without a rest. .. We have bound ourselves under the flag and we must give our bodies’.

The First World War was the first war in which war neurosis or ‘shellshock’ was officially recognised, with symptoms ranging from nightmares to blindness and paralysis. By the end of 1916, there were ‘mental wards’ in base hospitals and in post-war Britain, there were around 80,000 cases of shellshock. At the same time, mutilation, mortality and shellshock also led to new levels of physical intimacy and intensity among men. They looked after each other when ill or wounded, wrapped blankets round each other and at night their bodies spooned together as they slept. When his close friend Jim Noone died, Lance Corporal DH Fenton wrote to Noone’s mother: ‘I held him in my arms to the end, and when his soul departed I kissed him twice where I knew you would have kissed him – on the brow – once for his mother and once for myself’.

In a letter to Siegfried Sassoon just a month before his death in November 1918, Wilfred Owen wrote: ‘My senses are charred’. It is this sensory intensity and devastation of life in the trenches that remains one of the most haunting and powerful legacies of the First World War. 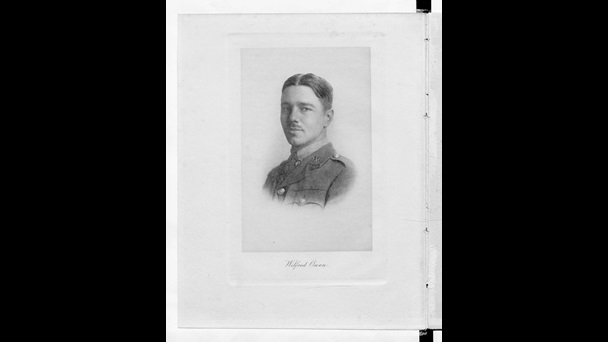 Usage terms Public Domain
Held by© The Wilfred Owen Literary Estate. This item can be used for your own private study and research. You may not use this work for commercial purposes.