Julian Walker explores the growth of slang used by soldiers in the trenches from describing food to alternate names for allies and enemies.

The limited diet of the British soldier in the front line included Tickler’s Plum and Apple Jam, known as ‘pozzy’ (possibly from a South African word for ‘preserved food’), ‘biscuit’, a hard-baked bread that had seen service for many years in Britain’s armies and navies, and ‘bully beef’, whose name may have come from the French boeuf bouillé (boiled beef) or possibly from the picture of a bull’s head on many tin designs. ‘Gippo’, stew or thick gravy, probably derived from a term used in the 17th and 18th centuries to denote a kitchen servant. Rum was delivered to the front in jars labelled SRD, interpreted as ‘seldom reaches destination’.

Experiences common to European armies at the time – poor food and the logistics of transport – provided similar terms for poor quality butter or margarine: ‘axlegrease’ and the German Wagenschmiere (wagongrease).

Soldiers grew adept at getting hold of food by various means; terms included ‘mumping’, ‘winning’, ‘cadging’, ‘humming’, ‘making’, ‘boning’, ‘souveniring’ and ‘hot-stuffing’. Some of these terms were invented at the time while others dated back centuries.

Cook book for the trenches 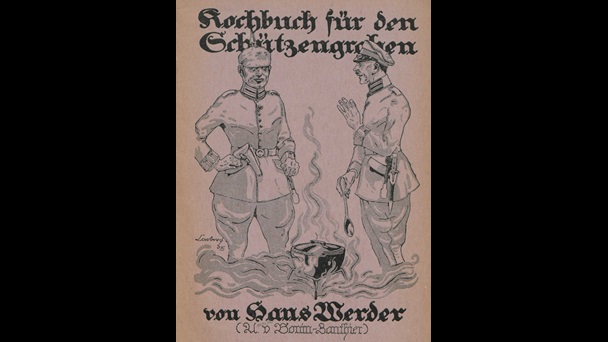 Cookbook for soldiers in the trenches published in 1915 giving simple recipes that could be made with few ingredients.

Many of the terms for weapons and artillery were remarkably similar on both sides of no man’s land, indicating a similarity of attitude, that the soldier had two enemies, the opposing forces and the war itself. Germans and British used the same terms for the German stick-grenade – a potato-masher – both sides had a ‘Black Maria’, and both sides used a German name for an aeroplane – a ‘Taube’.

Some of these terms became indelibly associated with the war: ‘whizz-bangs’ speaks explicitly of the soldier’s experience of knowing how to identify a particular kind of incoming shell, and what action might be worth taking. ‘Jack Johnson’, referencing the black heavyweight champion boxer, was for a shell which created a large amount of black smoke. ‘Moaning Minnie’ referred to the German trench mortar or Minenwerfer, the term carrying overtones of familiarity and humour.

Documentation of ‘Tommy Atkins’, the archetypical name for the British soldier, dates back to 1815. ‘Tommy’ became immortalised in the first of Rudyard Kipling’s Barrack Room Ballads, published in 1892:

The name ‘Tommy’ was used universally throughout the First World War, by both sides. Some correspondence to The Times in 1914 indicates that not everyone felt well-disposed towards the name. ‘An Ensign of 1848’ wrote on 23 October: ‘May I ... suggest that the time has now come ... to put a period to the use of the nickname ‘Tommies’? ... To hear these British soldiers referred to in depreciatory patronage as ‘Tommies’ by those who stay at home ... is unseemly and exasperating.’ Three days later another reader wrote that if you were to ask ‘a company of Garrison Artillery what they think of the name and of the verses in which it was first enshrined the reply was startling and anything but complimentary to the author of the verses.’ It is possible that this was a matter of opinion which differed between individuals, regiments, platoons, and any groupings of soldiers. Certainly there are clear indications of its being used by soldiers: the trench paper The Salient for Christmas 1915 advertises The Buzzer, the paper of the 49th (West Riding) Division, ‘written by Tommies for Tommies’. But many ‘Tommies’ preferred the terms PBI (poor bloody infantry) and ‘something to hang things on’, referring to the amount of kit they had to carry.

Tommy's diary: Chronicle of a fallen Englishman by Norbert Willy 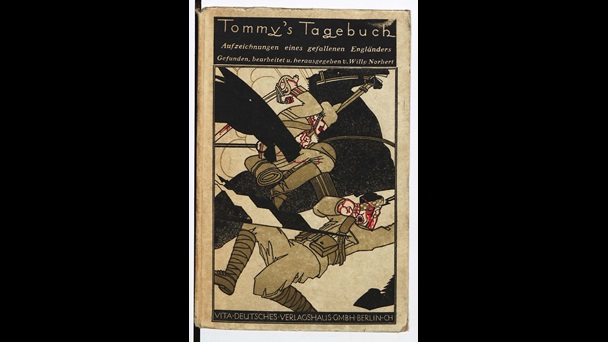 ‘Foot-slogger’ – ‘Foot slogging over Belgian ways’ was noted in the article The Route March, in the 5th Gloucester Gazette 5 May 1915 – was originally ‘foot-wabler’ or foot-wobbler’ in Grose’s The Vulgar Tongue (1785), a term of contempt for the infantryman much used by the cavalry. Related names were ‘gravel-grinder’, and ‘mud-crusher’. There were similar terms in French and German, German terms being particularly graphic – Dreckfresser (mud-glutton), Kilometerfresser (kilometre-glutton), Fusslatscher (foot-shuffler), Lakenpatscher (mud-crusher). According to Partridge only the Germans were resigned to the term Kanonenfutter, ‘cannon-fodder’.[1] German soldiers also called themselves Schweissfussindianer – ‘Indians with sweaty feet’ – which had an interesting counterpart in a term for British soldiers: 1000 Worte Front-Deutsch (1925) states that after ‘Tommy’ the main German epithet for British soldiers was Fussballindianer – ‘football Indians’.

A healthy cynicism typifies the self-parody to be found in the extended ‘alternative abbreviations’ of English, such as Rob All My Comrades (RAMC, Royal Army Medical Corps) or Rotten Fiddling About (RFA, Royal Field Artillery). It had counterparts in the German Fährt Alles Kaput (Everything goes kaput) for FAK (Freiwilliges Automobil Korps, the Volunteer Automobile Corps), or Mord-Gesellschaft Klub (Murder Company Club) for MGK (Maschinen-Gewehr Kompagnie or Machine-gun Company).

For the British soldier there were several terms used to describe the soldier opposing him. Turkish soldiers were referred to as ‘Jacko’, ‘Jacky’, ‘Johnny Turk’ or simply ‘Abdul’, while Austrians, if encountered, qualified for ‘Fritz’. ‘Johnny Bulgar’ was the enemy faced in Salonika. The Portuguese were known as ‘Pork and Cheese’ and ‘Tony’, but more often as ‘Pork and Beans’, the name of a meal soldiers at the Front recognised all too well. ‘Sammy’ was used for American soldiers, who often called themselves ‘guys’; Italians were referred to as ‘Macaroni.’

The term poilu was used widely for the French soldier both amongst the French, and occasionally by their British and American allies – French soldiers themselves preferred les hommes or les bonhommes, according to Brophy and Partridge. Meaning ‘hairy’, poilu is supposed to have originated in a story by Honoré de Balzac, Le Médecin de Campagne (1834), in which a group of French soldiers are required for a deed requiring particular courage. In this story only 40 soldiers in one regiment are deemed to be assez poilu, hairy enough.

Reports of the ruthlessness of the German army in China in 1900 refer to the use of the ‘Hun’ by the German Emperor as a symbolic ideal of military force, and thus the word was in place to be applied in 1914, especially in association with concepts such as ‘atrocities’. ‘Who’s afraid of a few dashed Huns?’ shouted Francis Grenfell, just before his death in 1915 during the Second Battle of Ypres.

‘The Hun’ and ‘the Boche’ (or ‘Bosche’) stayed in use throughout the war, though Fraser and Gibbons claimed that only the Royal Flying Corps used ‘Hun’ regularly.[2] ‘The boche’ or ‘boches’ (or ‘bosch/bosches’), with or without a capital B, was a French word, which arrived through contact with French forces in 1914, and is said to have derived from French slang caboche, meaning ‘rascal’ or ‘German’, or from Alboche, a variant on Alleman. A writer in the Western Daily Press, 15 October 1915, claimed that les Alboches developed into les sales Boches (‘the dirty Boches’), which provided the word Boches. 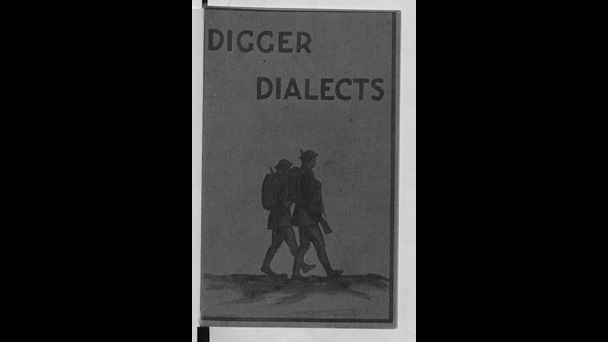 Dictionary compiled in 1919 of slang used by Australian troops. The book is called Digger Dialects after the colloquial name for Australian soldiers.

The British also used ‘Alleyman’ adopted from the French word for German, Allemand:

'I got up toot sweet and off I ran
And nearly stopped a bullet from an Alleyman'. [3]

‘Fritz’ was used throughout the war. From 1917 it was the only term used by Corporal FR Ingrey, in his diary, while the variation ‘Fritzies’ was a popular term among American soldiers.[4]

By 1916 the term ‘Jerry’ was in general use. Though the Daily Express had quoted the word on 3 March 1916, on 12 September 1916 it was clearly necessary to explain it further: ‘“Jerries” – that is the “official” Irish designation of the enemy.’ By 1918 it was used frequently, as in ‘Jerry had a machine-gun on us’[5]. The term carried more familiarity and weariness than hate; in Kipling’s A Madonna of the Trenches (1923), portraying something of the reality of being shelled, the enemy is ‘Jerry’ rather than ‘the Boche’.

From 1916 the term ‘German’ was common. Battery Flashes by ‘Wagger’ (CW Langley) 1916, reports the use of ‘Germings’ for Germans, while the diary of Lieutenant AB Scott uses ‘Hun’ in 1916, ‘Boches’ and ‘Huns’ until Spring 1918, but ‘Germans’ from Summer 1918. Among American soldiers the term ‘Heinie’, from Heinz (Heinrich), was common. According to Eric Partridge, the Germans had their own names for specific branches of the armed forces: Ernst or Ernest for artillerymen, Fritz or Otto for infantryman, and Franz for an airman.[6] The helmet finally adopted by the German infantry reinforced the use of the term ‘squareheads’, which had been in use to describe German soldiers since at least 1906. On 9 October 1914 The Manchester Guardian in a discussion on German national characteristics stated that ‘It is the shortness of the German head that gets him the nickname “squarehead” in England and America and “Têtecarrée” in France. Germans themselves, by the way, say that it is the Austrian Germans who are the “squareheads”.’ But the correspondent dismissed the generalisation as unhelpful.