The silence after the war

Considering trauma, censorship and social convention, Julian Walker asks why many soldiers were unwilling or unable to talk about their experience of World War One.

‘He was in the war, but he never spoke about it’. An unwillingness to talk about the war, expressed in this familiar sentence, sums up its horror, stoicism, and inexplicability. As the culture of the war then and since has been so much a verbal culture, this notable absence of words needs to be considered. Was the silence engendered by the soldiers themselves, was there pressure on them to remain silent, or was there a drift into leaving it all behind?

Too painful for words

One theory proposes that the obvious way to deal with the experience of suffering, of inflicting pain on others, and of witnessing death and injury on such a scale, so new and different for many men and women serving, was by removing it from speech: just as speaking about it made it real, not speaking about it contained it. But other aspects of the management of language affected the business of speaking about the realities of conflict.

A culture of control over written communication developed during the war, with the troops finding their letters censored, and the press knowing that information was being withheld. Numerous amendments to the Defence of the Realm Act (DORA) left people unsure of what they could legitimately say, while knowing that dissent was a punishable offence. The familiarity of the phrase ‘Somewhere in France’ on letters home indicates how much the troops complied with this. In this environment, with conscientious objectors and non-combatants publicly castigated, there was considerable pressure not to express negative attitudes towards the conflict. Troops meeting on the march often ironically gave the good-natured challenge ‘Are we downhearted?’(the formula assumed the cheerful response, ‘no!’); the fact that the actual soldiers’ answer was usually ‘Yes!’ itself acknowledged that the default answer was the optimistic ‘no’. As any talk that would cause people to doubt the worth of pursuing the war and leave them feeling that the costs were too high, involved risk, a pragmatic course was that of silence.

Tim Cook has suggested that swearing was such a strong part of soldiers’ way of coping with war, and an expression both of belonging and of excluding others, that many would have had trouble talking about their experiences without swearing.[1] This reinforces the view that to a large extent the war was mediated by language; it proposes that there was an essential link between the primary experience of conflict and a particular kind of language. In a domestic environment, where obscenity would cause a breakdown in communication, soldiers were not equipped to ‘translate’ – it was easier not to talk about the experience of the war at all.

To what extent did soldiers know how to talk about what they had experienced? The absence of slang terms for major injuries – the slicing away of parts of the body by shrapnel – implies that these could only be expressed in clinical or literary terms or not at all. Around 10 years after the armistice there was a spate of books which explored the ‘pornography’ of war, but during the conflict this was avoided; compare ‘a Mills bomb would blow seven men to rags’ from Charles Edmonds’ A Subaltern’s War (1929) with ‘concerning their actual killing exploits the men were absurdly reticent’ from Troddles in the Trenches by R Andom, printed for Newnes’ Trench Library (1919). For those trying to write about the experience of the Front there were only words that described indescribability; it was ‘beyond description’[2], ‘utterly undescribable’.[3]

Belonging at the Front

A repeated motif is the idea of the Front as the place where the soldier belongs. For Robert Graves ‘home was awful because you were with people who didn’t understand what this was all about’: in particular he noted that the level of noise at the Front was incommunicable. Corporal J Bemner writes in his diary, three days after his return from England: ‘I am beginning to feel all right again after leave’ (6 August 1915). A poem, On Leave, in the Depot Review No.5, begins:

Erich Maria Remarque wrote of home in All Quiet on the Western Front (1929): ‘I do not belong here any more, it is a foreign world.’ Those who had not been at the Front could not possibly understand what it was like.

Reticence was praised more highly then than now. Sangfroid was employed and no doubt felt at all levels – ‘nothing makes you feel madder than being fired at when doing a job that has to be done slowly and carefully, such as insulating the wire after baring the cable and joining the ends. A man who has been fouled at footer has the same feeling’, wrote C W Langley in Battery Flashes (1916). Not expressing despair was reflected back as bravery, increasing self-esteem and status. Rudyard Kipling, devastated in private by the death of his son at the Front, mentioned his name in passing in one sentence in his two-volume The Irish Guards in the Great War (1923). In the face of the inexpressible, silence was the expected and praiseworthy position.

The verbal expression of trauma

Those who declared themselves unable to cope, through shell or combat shock or devastating loss of comrades, were generally treated as malingerers rather than victims. Few doctors, with the notable exception of W H Rivers and Arthur Brock at Craiglockhart Hospital for victims of shell shock, explored the verbal expression of trauma. Up to 1917 treatment for shell shock involved being forbidden to talk about the war. One officer treated by Rivers at Craiglockhart, said ‘that it was obvious to him that memories such as those he had brought with him from the war could never be forgotten. Nevertheless, since he had been told by everyone that it was his duty to forget them he had done his utmost in this direction.’[4] It was felt that silence settled the mind, and that unpleasant memories could be replaced by means of pleasant activities such as walking and sports. An advertisement in the Pall Mall Gazette (8 May 1919) read: ‘So bury all those unpleasant memories in Dora’s waiting grave … and get your Austin Reed straw hat to signalise the event’ [DORA was the Defence of the Realm Act].

Literary accounts of the war

Henri Barbusse’s graphic account of trench life, Under Fire (1916), was widely read on both sides of the Front, with a 1917 reviewer in The Manchester Guardian noting that generally ‘the “horrors of war” are taken for granted but ... mercifully concealed.’ But the majority of the novels and poems that verbally explored the body’s destruction were not published until 10 years after the armistice: the translation of Remarque’s All Quiet On The Western Front (1929), Robert Graves’ Goodbye To All That (1929), Charles Edmonds’ A Subaltern’s War (1929), Helen Z Smith’s Not So Quiet (1930), Frederic Manning’s Her Privates We (1930), Siegfried Sassoon’s Memoirs of an Infantry Officer (1930) are a few of over 60 books on the war that were published in these two years. For Graves, Goodbye To All That was, as the title states, an attempt at closure: ‘once this has been settled in my mind and written down and published it need never be thought about again.’ The interim silence seemed to be as much about ‘holding on’ as ‘holding back’. But there appears to have been a consensus for a period of literary silence, broken after a decade with a tumult of descriptions of violent death.

Under fire: The story of a squad by Henri Barbusse 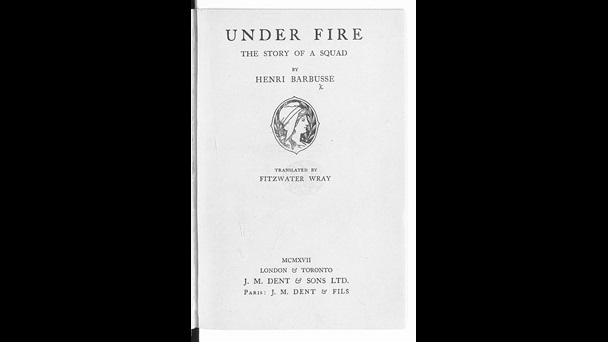 Translated from the French novel Le Feu first published in 1916, Under Fire: The Story of a Squad realistically covers the horrors of the war.

Typical of those who ‘did not speak about the war’ were lapses into silence, the ‘thousand-yard stare’, or ‘a vacant look’, all of them characterised by absence of communication. This absence is seen also in the way the major war memorials communicated the experience of the war: the empty tomb of the Cenotaph, the absent name of the Unknown Warrior, the open space at the centre of the major architectural memorials in France and Belgium, at Vimy, Thiepval and the Menin Gate; and most of all in the annual two minutes’ silence on Armistice Day. The ‘empty space in the centre’ became the defining motif of memorialising the war.

And ultimately, what did the people who were not there actually want to hear? While relatives needed details of time and place in order to make meaning out of their loss, did they want to know that the loved one’s body had been blown apart or had lain rotting unburied for days? W H Rivers was clearly aware that there was the ‘natural tendency to repress, being in my experience almost universally fostered by … relatives and friends’  John Brophy wrote in 1965: ‘for the men who survived it, it became in retrospect an experience to be thrust out of memory most of the time, an experience impossible for the mind to digest, and, for many, tolerable only when some of the less distressing events were selected for recall and dressed up with sentimental emotions’.[6]

[4] W H Rivers, Instinct and the Unconscious: A contribution to a biological theory of the psycho-neuroses (Cambridge: University Press, 1922), p.189

[5] W H Rivers, The Repression of War Experience, presented to the Royal School of Medicine, 4 December 1917.