Weapons of World War One

Senior Curator Paul Cornish looks at the developments in weaponry technology and strategy that led to the modern warfare of World War One, which was characterised by deadly new weapons, trench deadlocks, and immense numbers of casualties.

1914 witnessed the clash of huge armies armed with deadly new weapons that had been developed during the ‘second industrial revolution’ of the late 19th century. Chief among them was quick-firing artillery, which could deluge soldiers with hails of deadly lead balls cascading from shrapnel shells. Meanwhile the bullets fired by rifles and machine guns had gained in range and accuracy and could cause horrible wounds. By the year’s end a million European soldiers lay dead. The armies were forced to seek the relative safety of trenches and dugouts. A new type of warfare had been born.

Indian infantry with gas masks in the trenches 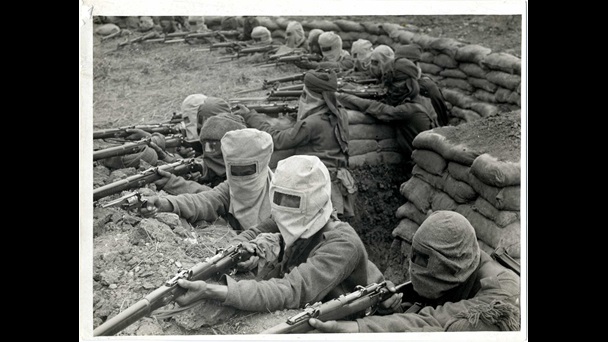 Bullets fired by rifles and machine guns had gained in range and accuracy and caused horrible wounds.

Old weapons were revived or re-invented to wage trench warfare effectively. Mortars, which offered frontline troops a portable means of lobbing high explosive bombs into enemy trenches, began to proliferate. Hand grenades offered similar firepower on a smaller scale to individual soldiers. To the horror of many commanders, the grenade threatened to supplant the rifle as the infantryman’s chief weapon. Finally, the most primitive weapons of all, clubs and knives, were used in the grisly business of hand to hand combat during trench raids, or when ‘cleaning’ – to use the French Army’s euphemism – a captured position of enemy survivors.

But the armies also sought to break out of the trench deadlock. Innovations such as poison gas – initially released from cylinders, later delivered by shells – and the tank offered the fleeting hope of a solution. But the gas was met by effective counter-measures and never became a major cause of casualties. The early tanks lacked speed, range and reliability. Once committed to battle they were essentially a ‘one-shot’ weapon. The best answer to the conundrum was found in the development of artillery.

Once the war became trench-bound, high explosive shells superseded shrapnel as the preferred munition. All sides strove to increase the number of heavy guns available to them, and risked the dislocation of their entire economies to produce millions upon millions of shells for them to fire. New techniques were developed to improve the efficiency of the guns. Air observation – both in the form of photographic reconnaissance and in spotting for the gunners – was the key.

By 1917 attacking troops supported by sufficient artillery could almost guarantee to break into enemy defences. The enemy’s guns would be neutralised as far as possible by ‘counter-battery’ fire and its infantry pinned down by artillery and machine gun barrages. The infantry would advance behind a ‘creeping barrage’ that forced the defenders to keep their heads down. Smoke shells might be used to cover the advance. New instantaneous fuzes allowed high-explosive shells to cut paths through barbed-wire entanglements. Ground-attack aeroplanes might be swooping overhead. Any counter-attack would be met with ‘SOS’ barrages of artillery and machine gun fire.

Of course the infantry still needed to fight its way forward, and it too was aided by new weapons. In 1914 the infantryman had relied almost entirely upon his rifle and bayonet. By 1917 an infantry platoon would include specialist sections of ‘bombers’ (armed with hand grenades), rifle-grenadiers, and light machine gunners or automatic riflemen. The latter would pin the enemy down while the bombers, supported by riflemen, worked themselves into a position from where they could launch the decisive attack. These new tactics were made possible by the development of light automatic weapons, which offered small infantry units a level of firepower unknown in 1914. 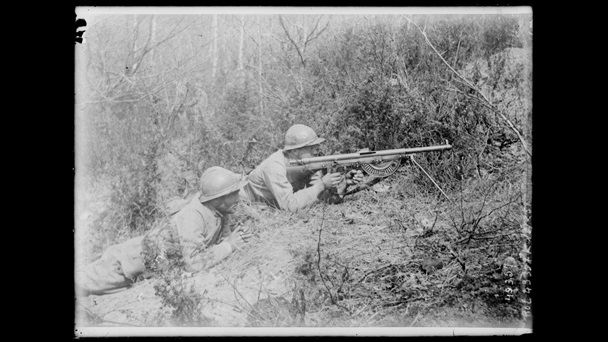 An innovation of the second half of the war, the French Chauchat allowed the infantry to keep moving and firing during attacks.

But none of these innovations in weaponry alone could deliver the Holy Grail – a breakthrough and a return to mobile warfare. When this form of warfare re-emerged in 1918 it was as a result of refinements in the tactics, which maximised the effect of the weapons. Artillery no longer sought to blast the enemy from its defences, or even necessarily to kill his troops. Instead, short, but intense barrages, mixing high explosive and gas, neutralised the enemy’s ability to resist – cutting his communications, suppressing his artillery fire and disorientating the men. The Germans achieved breakthroughs in the spring and summer of 1918 by using this sort of barrage and attacking with highly-trained assault troops. But the latter were a finite commodity and the Allies were eventually able to counterattack. They did so with grim efficiency. Artillery was still the key, but the French, British and Americans were able to combine its power with large quantities of tanks (when serviceable) and superior numbers of aircraft (weather permitting).

Photograph of a British tank in the mud, Third Battle of Ypres Tanks, often formidable weapons, were sometime not suitable for use due to the deep mud encountered during some battles such as the Battle of Passchendaele.

Usage terms © IWM (Q 6327). This item is available to be shared and re-used under the terms of the IWM Non Commercial Licence.

Thus the culmination of three years of innovation and tactical development finally led to the breaking of the deadlock on the Western Front. But this came at a terrible cost. The tactical lessons of 1915–17 had been learned only with great loss of life. And when mobile warfare returned it brought with it casualties that rivalled the slaughter of 1914. This was the inescapable nature of a war fought with modern weapons. In the words of French general Charles Mangin, ‘whatever you do, you lose a lot of men’.

Pilots of the first naval squadron 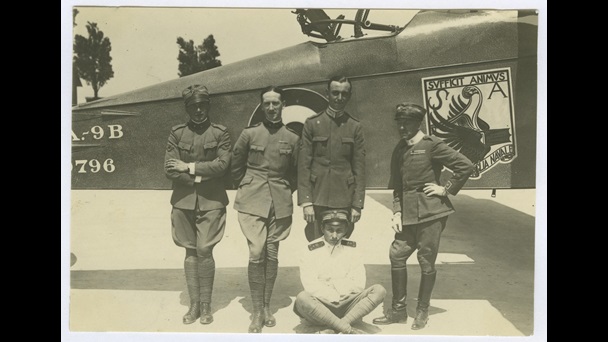 Pilots of the Italian First Naval Squadron, which was engaged in supporting the Italian Navy.