Wounding in World War One

World War One created thousands of casualties from physical wounds, illness, and emotional trauma. Dr Julie Anderson reflects on the subsequent impact on the role of doctors and nurses, and the medical treatment, organisation and new technologies that they employed.

The First World War created thousands of casualties. New weapons such as the machine gun caused unprecedented damage to soldiers’ bodies. This presented new challenges to doctors on both sides in the conflict, as they sought to save their patients’ lives and limit the harm to their bodies. New types of treatment, organisation and medical technologies were developed to reduce the numbers of deaths. 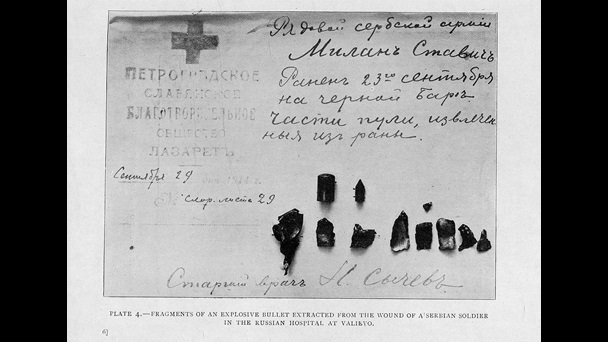 Fragments of an explosive bullet extracted from the wound of a soldier in 1914.

Casualties had to be taken from the field of battle to the places where doctors and nurses could treat them. They were collected by stretcher-bearers and moved by a combination of people, horse and cart, and later on by motorised ambulance ‘down the line’. Men would be moved until they reached a location where treatment for their specific injury would take place.

Where soldiers ended up depended largely on the severity of their wounds. Owing to the number of wounded, hospitals were set up in any available buildings, such as abandoned chateaux in France. Often Casualty Clearing Stations (CCS) were set up in tents. Surgery was often performed at the CCS; arms and legs were amputated and wounds were operated on. As the battlefield became static and trench warfare set in, the CCS became more permanent, with better facilities for surgery and accommodation for female nurses, which was situated far away from the male patients.

Wounds to the extremities were so severe that many thousands of soldiers had to have limbs amputated. In France, a guillotine, a variation on the one used to cut off heads in the French Revolution, was used to amputate limbs. As traumatic as it was, amputation saved the lives of many men as it often prevented infection.

Infection was a serious complication for the wounded. Doctors used all the chemical weaponry in their arsenal to prevent infection. As there were no antibiotics or sulphonamides, a number of alternative methods were employed. The practice of ‘debridement’ – whereby the tissue around the wound was cut away and the wound sealed – was a common way to prevent infection. Carbolic lotion was used to wash wounds, which were then wrapped in gauze soaked in the same solution. Other wounds were ‘bipped’. ‘Bipp’ (bismuth iodoform paraffin paste) was smeared over severe wounds to prevent infection. 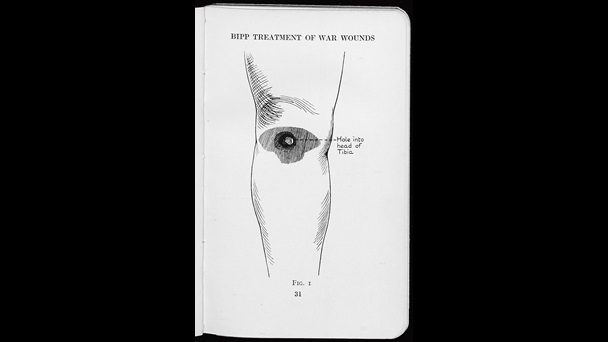 Dr Rutherford Morrison's An Introduction to Surgery recommended that war wounds should be cleansed as deeply as possible with an antiseptic past - a treatment know as 'Bipp Treatment'.

In addition to wounds, many soldiers became ill. Weakened immune systems and the presence of contagious disease meant that many men were in hospital for sickness, not wounds. Between October 1914 and May 1915 at the No 1 Canadian General Hospital, there were 458 cases of influenza and 992 of gonorrhoea amongst officers and men.

Wounding also became a way for men to avoid the danger and horror of the trenches. Doctors were instructed to be vigilant in cases of ‘malingering’, where soldiers pretended to be ill or wounded themselves so that they did not have to fight. It was a common belief of the medical profession that wounds on the left hand were suspicious. In a secret report during the war, Colonel Bruce Seaton examined 1,000 wounds and injuries to Indian troops being treated at the Kitchener Hospital in Brighton to find out whether any of them were self-inflicted. After careful investigation, however, Seaton concluded that there was no evidence to support the theory of self-wounding among the Indian soldiers. 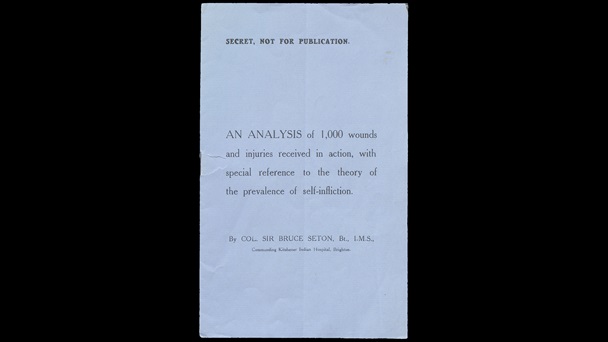 Colonel Bruce Seaton's report found no evidence to support the theory of self-wounding among Indian soldiers.

Wounding was not always physical. Thousands of men suffered emotional trauma from their war experience. ‘Shellshock’, as it came to be known, was viewed with suspicion by the War Office and by many doctors, who believed that it was another form of weakness or malingering. Sufferers were treated at a range of institutions. Officers went to Craiglockhart where they were treated by psychiatrists such as W H R Rivers, and the men went to hospitals such as Netley, or were placed in asylums. Treatment was vastly different at each institution: the officers at Craiglockhart were given therapies such as talking cures; the men at Netley were treated with more physical forms of ‘cure’ such as physiotherapy.

If a wound was serious enough it meant the soldier going back home to receive further treatment. The hospitals at home provided more technologically advanced treatment, away from the frantic activity of the care near the battlefield. Many soldiers had to have further surgery to clean up the hurried efforts of surgeons at the Front. A number of therapies were available at the hospitals far away from the battlefield. In Britain, the wounded were cared for in a range of buildings around the country, from schools to stately homes. In some cases, suitable surroundings were deemed an important part of the recovery process. The Pavilion in the seaside town of Brighton was repurposed to provide a hospital for many of the wounded Indian troops. These men were considered particularly vulnerable to the cold winters in France and Belgium and were given electrotherapy to cure conditions believed to come on from cold weather. 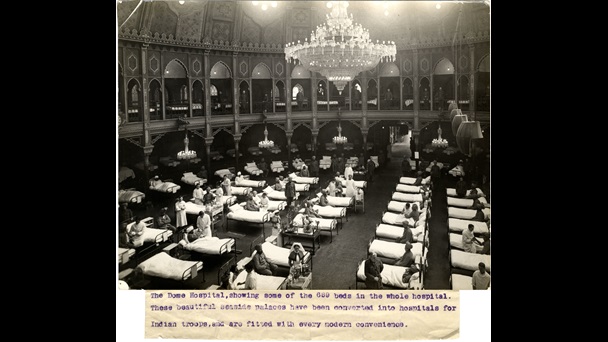 The Dome Hospital in Brighton had 680 beds for wounded Indian soldiers.

A final cure often took a long time and consisted of hours of therapy, rest and recuperation. Massage and electrical therapy were some of the treatments provided to the wounded. Hospitals were places to convalesce from injury, and men also rested outside when the weather was clement. Sometimes they required more surgery, or physiotherapy and bed rest were prescribed. The object of the treatment was to get the men back to the trenches as quickly as possible, or to ensure that they were ‘invalided out’ as fit as possible and would therefore only require a small pension, so that they did not cost their country a lot of money. Artificial limbs were provided to war veterans for free, as a reward for their service. However, one British report suggested that men were unwilling to use the cumbersome artificial limbs that were provided by the state, instead preferring to use crutches and a peg leg. Many men were left with permanent effects of wounding, unable to return to their pre-war employment.

The First World War changed the ways that soldiers were cared for when they were wounded. New technologies including blood transfusion, control of infection and improved surgery ensured that, although many men were permanently wounded, many more survived than died as a result of their injuries.